"Finish each day and be done with it.  You have done what you could; some blunders and absurdities have crept in; forget them as soon as you can.  Tomorrow is a new day; you shall begin it serenely and with too high a spirit to be encumbered by your old nonsense."
-Emerson

More than a road race...

One of my sweet friends texted me the other night and in our conversation she gave me some words of encouragement and said how excited she was for me, that the 5k "means so much...not just a road race."  Although deep within me I knew this to be true, I think I stuffed the significance of it way back in my head.  I don't like to go there because often times it brings on emotions I just don't always feel like dealing with at the time.  However, I think it was so important that she did text those words to me so I could read them.  I actually went back and reread them several times as I really tried think about all that it meant for me...

I was knocked down (hard), and the mere thought of doing anything physical for an extended period of time exhausted me, both mentally and physically.  When I first started "running" after I finished my cleanse, I could not run from telephone pole to telephone pole without losing my breath.  It was hard for me to even fathom being able to run a 5k, but it was harder for me to let my body be knocked down by the unwelcomed intruder.  I've really never been one to "show off", but I am a little bossy, so there was no way I wasn't going to get back up after being knocked down.

Since being diagnosed with the Big C, it's been difficult for me to consider myself as being healthy.  I feel tainted...my clean bill of health was rudely vandalized.

I've talked before about the Tamoxifen and the lovely side effects that come along with it; exercise counteracts those side effects.

Those are just a few of the reasons I started to run, and today, as I ran and completed my first (ever) 5k, I realize that it really is so much more than a road race.

After I hit the two mile mark, with music playing in my ears, I looked at the other runners around me and thought, "I wonder what their stories are".  I'm certain that for many of the participants in today's race, it may have been just a road race.  But for countless others, surely it was more than that.   As I started to create stories for each runner in my head, I looked up to see my family, jumping and cheering for me on the sidewalk.  They are it!  They are the MORE.  I "run" for me, but I also "run" for them.  The Big C can feel like it shakes the ground viciously below your feet, but when you get back up, and fight back harder than you've ever fought in your life, it's a feeling of victory.

Today I ran a 5k with Shannon by side the whole way, in many ways representing the crew I've had by my side through my entire Big C journey.  We ran together the entire way and crossed the finish line at the same time.  This was a good reminder that I am never alone in this journey we call life.  I have an abundance of love and support from my family and friends and I am truly grateful for all of them.

And, how about the fact that my first 5k was the Butterfly 5k?  This 5k benefits a foundation for a little girl whose life was short, but whose significance and legacy continue to thrive. 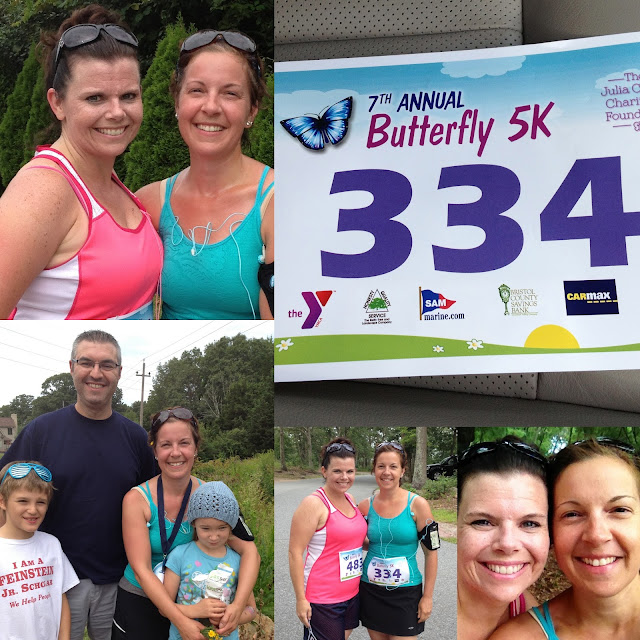 "In running it doesn't matter whether you come in first...in the middle of the pack...or last...You can say, 'I have finished.'  There is a lot of satisfaction in that." -Fred Lebow
Posted by Linda at 9:47 PM No comments: 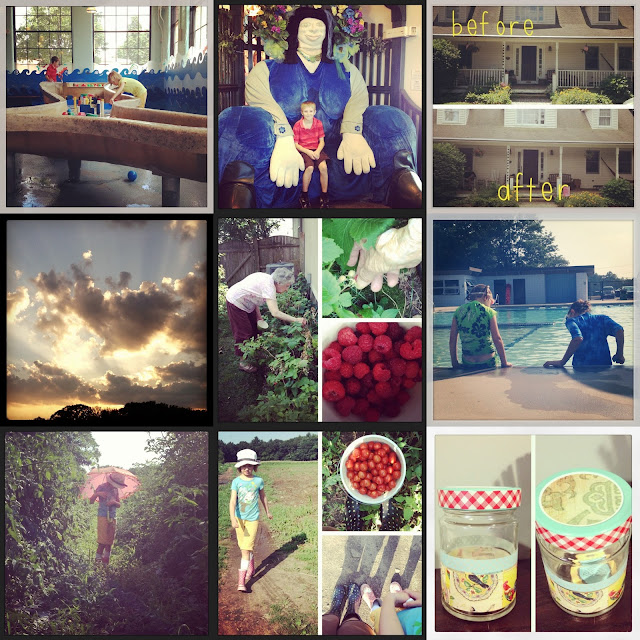 1, 2. trip to the Children's Museum 3. No more railings
4. pretty sky 5. Mem picking raspberries 6. a day at the pool
7. Little Miss (princess) at the farm 8. Picking tomatoes 9. Crafting with washi tape 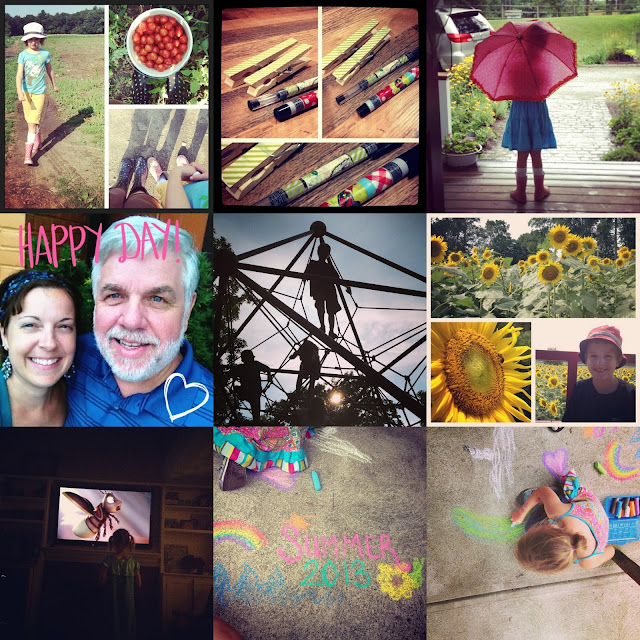 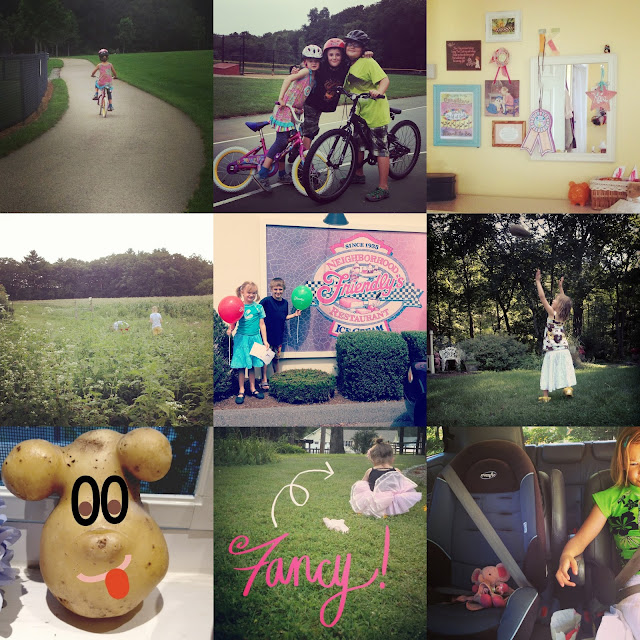 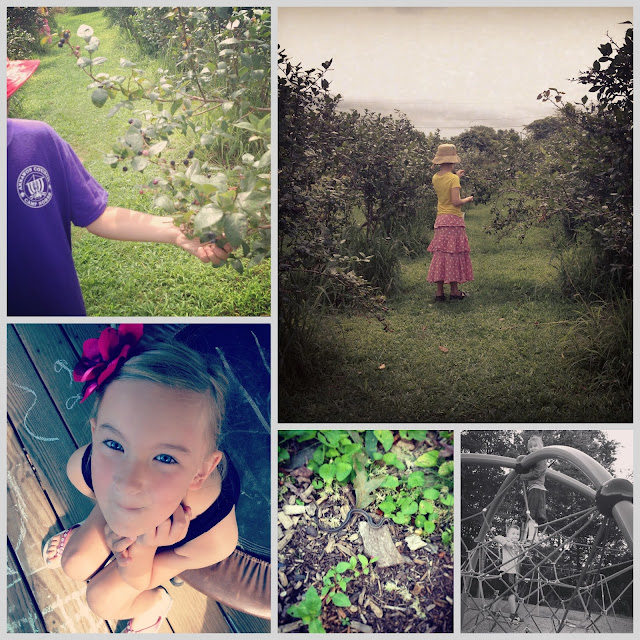 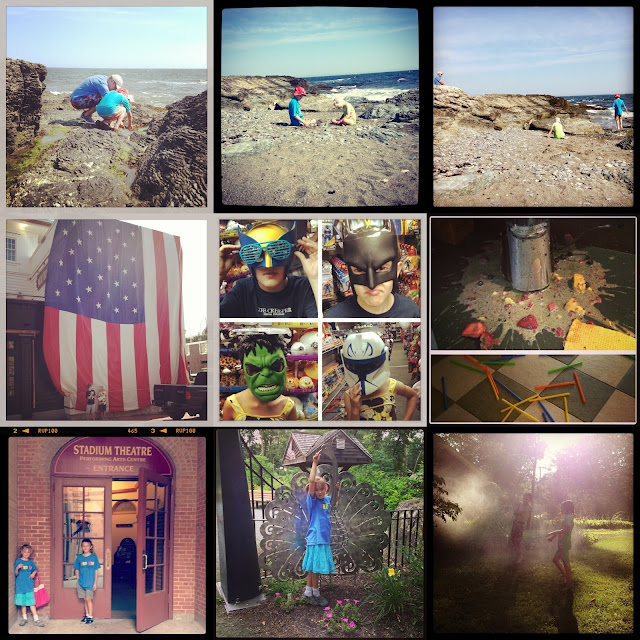 Today I'm linking up with Jeannett at Life Rearranged

Photography takes an instant out of time, altering life by holding it still.
Dorothea Lange
Posted by Linda at 6:38 PM No comments:

Have you seen this?

Email ThisBlogThis!Share to TwitterShare to FacebookShare to Pinterest
Labels: life

Last year on this date, I wrote this post.  It's hard to believe an entire year has gone by since my final cleanse.  As I wrote last year's post, I remember feeling uncertain and anxious about the days to follow.  I was tired, weak and terribly sick, and still recovering from the infection that kicked me to the curb.  It seemed that feeling "normal" was in the far distant future and perhaps not even there at all.   I still have days where I fight the demons and try to find my balance with my post Big C life, but I'm doing it.  Everyday I'm doing it, some days more gracefully than others.  And just this morning I ran 3.1 miles in preparation for my first 5k on Saturday.  I had to wear a headband to keep my thick, curly locks at bay.    What a difference a year can make!

By the way, if you see this lobster faced girl running by your neighborhood, do not be alarmed.  I turn a nice shade of red when I exercise. 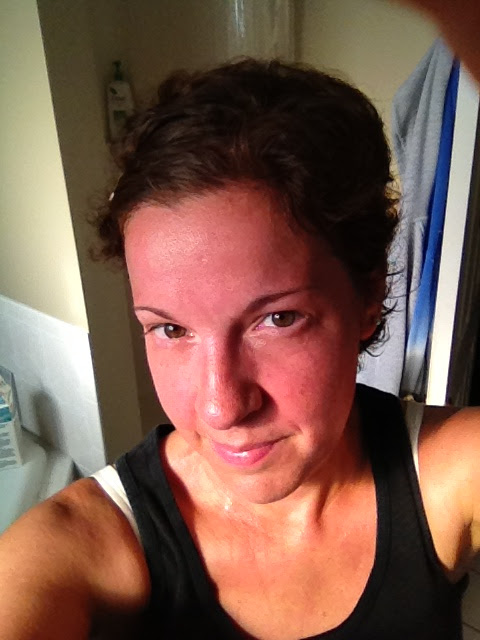 You can never plan the future by the past.
Edmund Burke

That's what time it is on Thursday night as I write this post.  I thought maybe I would have something to say, but I don't...writer's block, a dry spell...who knows.  Hmmmmm, what do I have to talk about?

Oh how about that I signed up for my first 5k, and....it's in a week.  Yikes!  Last year I was recovering from my last chemo treatment cleanse and this year I'll be running 3+ miles.  What a difference a year makes!  In case you missed one of my last posts on the subject of running, I am not a runner, I never have been and before the Big C, I never ran a day in my life.  But,  I have to admit (quietly), I think I'm actually starting to like it (a little bit anyway). I will be participating in the Butterfly 5k and my quick willingness to finally sign up for an actual run is that the course is downhill...yay for that.

So, I think I'll have to get my butt in gear and get some cute running shorts.  If I look good perhaps that will distract from the actual running part.  Well it is now 11:21 and I'm done this babble for the night.  Yes, it took 14 minutes for that.  Thanks for listening. 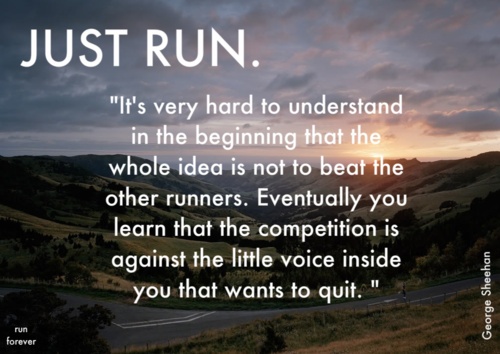 Email ThisBlogThis!Share to TwitterShare to FacebookShare to Pinterest
Labels: me, running, summer

Sorry I haven't been around much these days.  I'm on summer mode and haven't had the brain capacity to post much of anything.  Maybe I'll get back into the routine once September rolls around...maybe.

Here are some photos to show what we've been up to around here.

Yesterday E spent a good 2 1/2 hours feeding, chasing and holding chickens at my cousin's house.  He and Little Miss also selected eggs to put in the incubator.  E is so excited to care for some baby chicks when the eggs hatch.  My cousin will be generously allowing us to take care of the chicks for a short time and then give them to her to raise in her yard.  I use the word "generously" very loosely ;/ 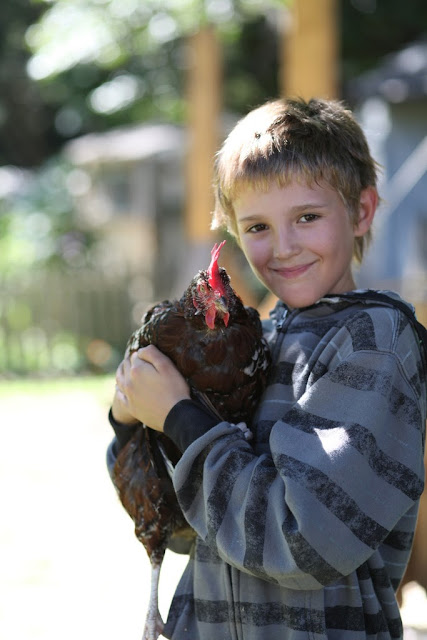 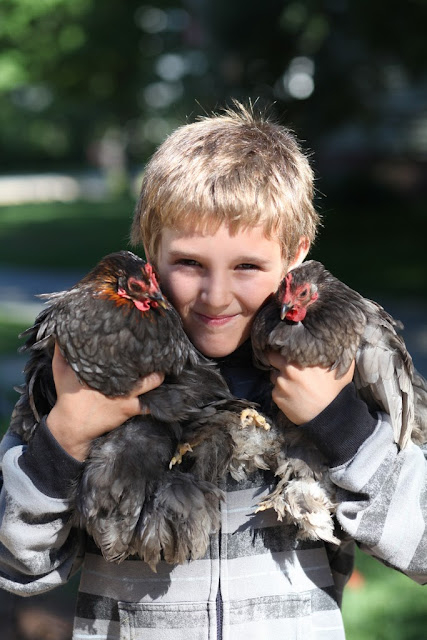 In searching for a place to pick organic blueberries, I found Alpacas of Harkney Hill...visit the alpacas and pick blueberries.  We gave it a try.  We were able to tour the alpaca farm, feed the alpacas, and learn all about them. 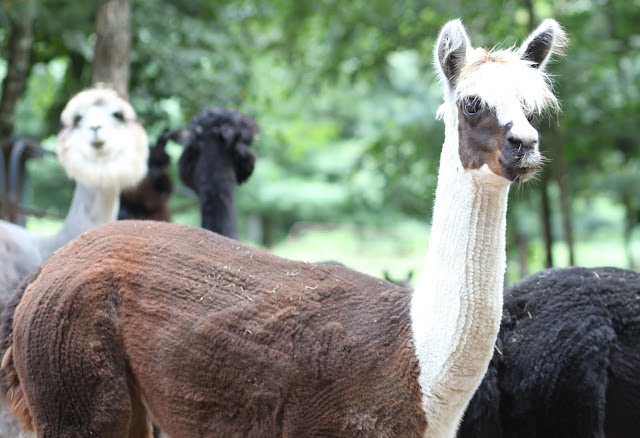 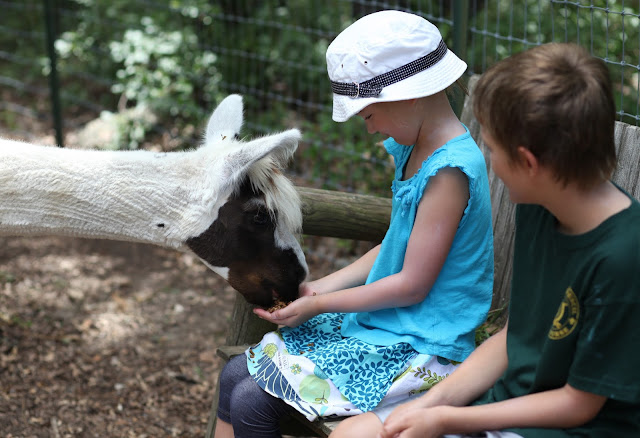 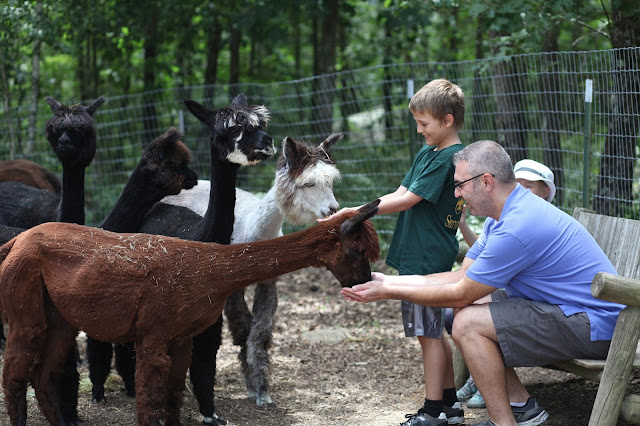 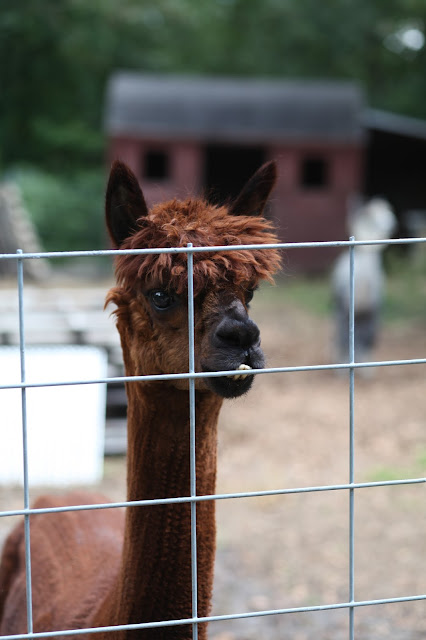 Then we picked some blueberries and by we, I mean Victor and I.  The kids chose to explore in the woods and climb rocks. 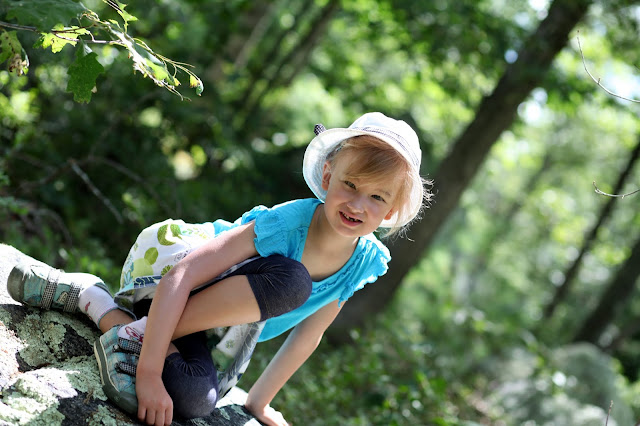 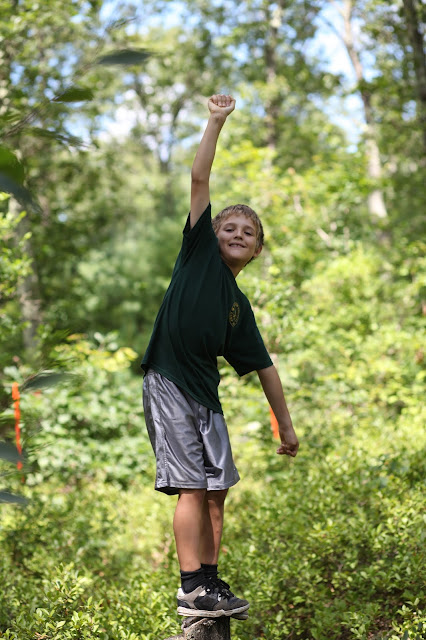 Unfortunately we didn't really leave enough time to pick and because the blueberries were wild blueberries, it can take a long time to fill a container.  I wouldn't necessarily visit this farm just for blueberry picking, but if you're looking for something different and have a few hours to spend there, it may be a fun place for you to go. 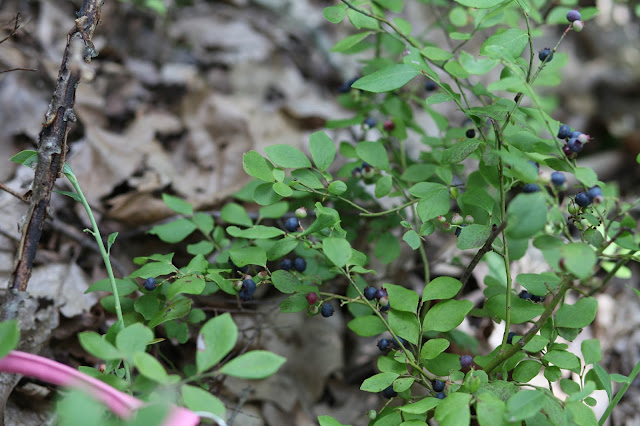 We also were able to spend some time by the ocean last week and the weather was perfect.

No trip to the ocean is complete without red sequined shoes. 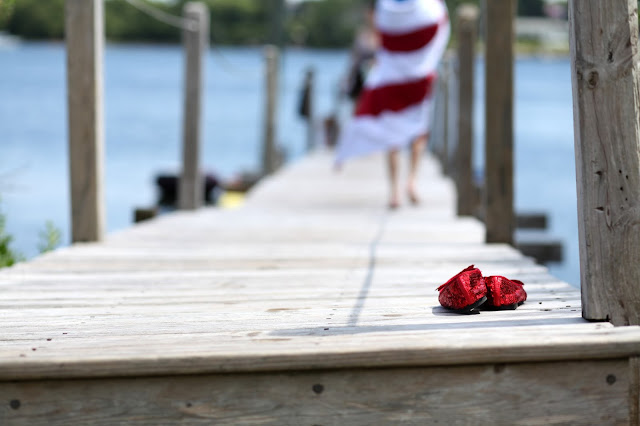 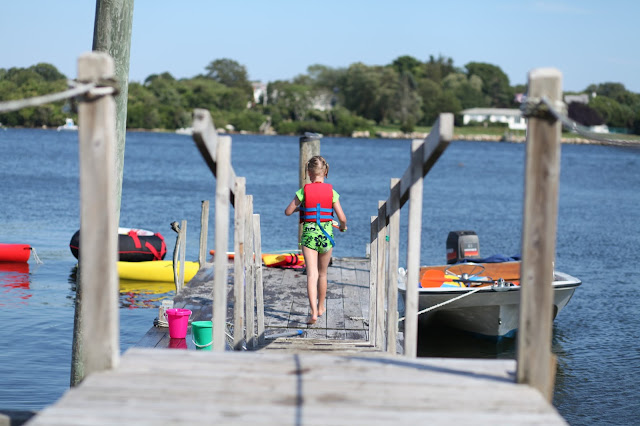 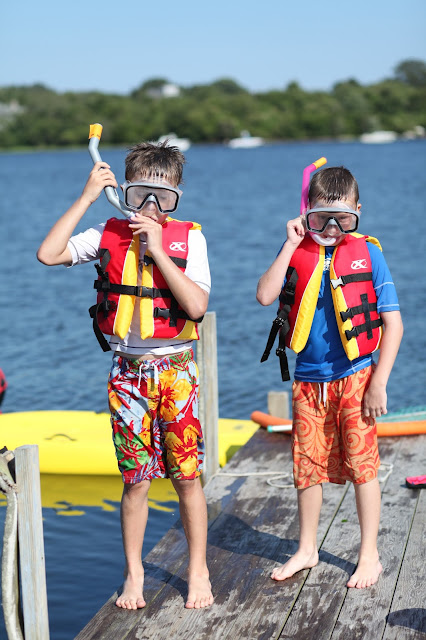 Little Miss was very excited to find the biggest of the jelly fish caught that day. 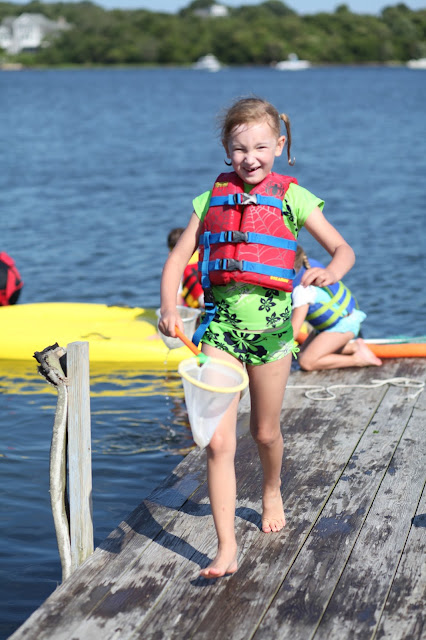 These next two photos not only show how excited Little Miss was to steer the boat, they show how stinkin' cute she looks with a missing tooth. 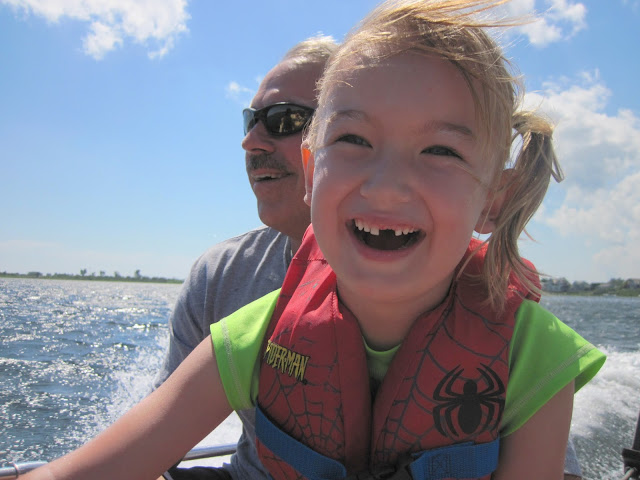 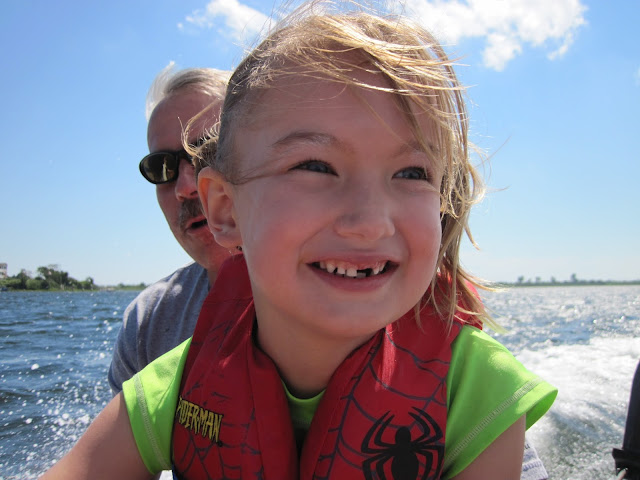 And the sunset that evening was just beautiful! 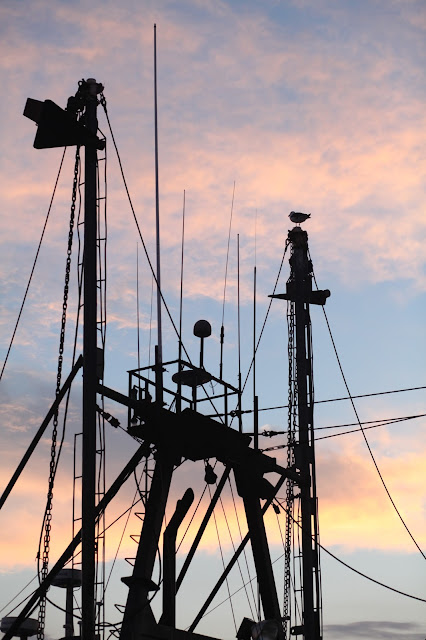 “Summertime is always the best of what might be.” ― Charles Bowden
Posted by Linda at 11:42 AM No comments: