About a month ago, I was having a conversation with a friend and the unknown fact that I swam in high school came up. I wasn't a star swimmer as I only participated during the school swim season. But, I could do all the strokes and the butterfly was my favorite. Having this conversation got my interest peaked to test out my stroke the next time I was in the water, and I even told her I would text her a video.

This past week we were on vacation and I used the resort pool to test out whether or not I was continuing to live in my former life. I'm happy to say it was similar to riding a bike and I did it. My legs are a bit weak-looking from the yuck in my body, but for a 43 year old with metastatic breast cancer, I was proud of myself...sorry for the bragging.

A couple of months ago, I couldn't sit in a car without intense pain and this week I swam the butterfly stroke in a pool. If you would have told me months ago that I would have done that, I wouldn't have believed you. But I even proved myself wrong.

When you doubt yourself, I challenge you to do it anyway. I think most times you'll be surprised and you'll be glad you made that decision. Most rewards are a result of risks and challenges.

It's painful for me to look at photos and remember the memories before my new life started last summer. The posts from Facebook pop up from years ago and it brings tears. My old life is gone, only memories and experiences keep us connected. I can hold them in my heart and be grateful they were a part of my life, but if I get too stuck there, it's not helpful.

So, this small moment, where I was able to connect the old with the new helped me to see that maybe it's not all gone, but merely transformed. It also reminded me to have faith; regardless of the challenges life experience's possess, go for it and do it anyway.

As promised, I'm going to share more of the details from my visit to Dana Farber last week. I guess I think it's important to keep all of it real. It was a positive visit, but honestly it's truly never easy, and this day was no different.

Our day started before 7:00am when we left the house to arrive by 8:00am for bloodwork; bloodwork that revealed that my White Blood Cell count was still in the gutter and that I had to continue to wait for it to go up before restarting the meds because of my safety. It also resulted in a smaller dosage that hopefully will still attack and kill the yuck. And still, here we are a week later, and I find myself in the same predicament. My WBC are moving like a sloth and apparently in reverse. Getting that news on Tuesday was certainly frustrating and left me feeling a bit paralyzed and defeated. 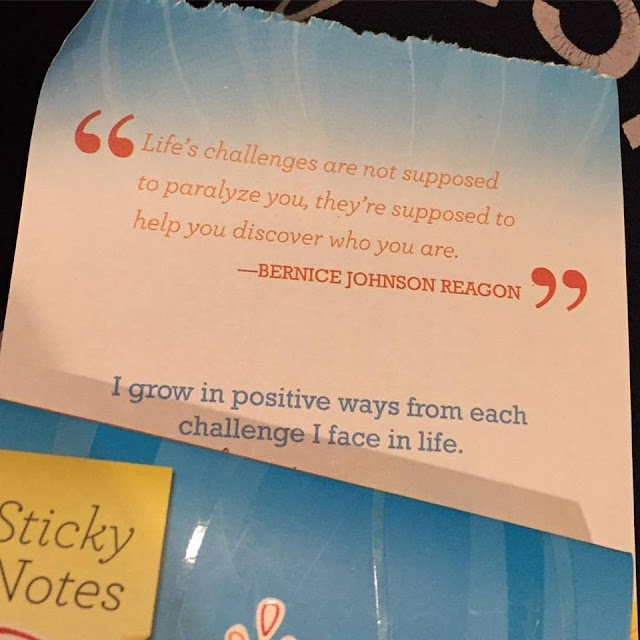 Back to last week - the visit also included an appointment with my oncologist, an infusion of some meds for my bones, two painful shots in my tush and my first visit with a neuro-oncologist, including a thorough exam, done by his fellow, of my brain function, of which I passed with flying colors.

Most of the two hour visit was also spent talking about my symptoms and experiences I've had prior to diagnosis and after. He concluded that it was probably best to prescribe a low dose of some medication for seizures, as it is his determination that the long term issues I've had with my eyes and the numbing sensations in other parts of my body could be small seizures. I was not surprised, but actually a bit relieved, because I've "known" for some time that these vision and numbing sensation episodes have been small seizures; I know my body, sometimes too well. The hope is that by being on the meds, things will not be as frequent and I will not have to panic every time it happens. He is really not worried about the "seizures" because they come and go, which is a good sign. He just doesn't want the small to ultimately become big, thus the meds. The meds have been a simple addition to my daily regiment and if they can give me some peace of mind, it is certainly worth taking them.

This truly is a full-time job and on this day, I undoubtably worked my entire shift with few breaks.

So as I continue to wait for my WBC to rise, I try to take advantage of the less side effects I seem to be experiencing and reflecting on the positives, like today's visit to the radiation oncologist when she said, "Well, I think you're doing outstanding." She doesn't know all the ins and outs but as far as recovering from the radiation, she was very pleased. And her being pleased, gives me some relief as well.

And a welcomed distraction to the Big C has been this nest of newly hatched birds. I'm slightly obsessed with getting a glimpse of them on a daily basis. 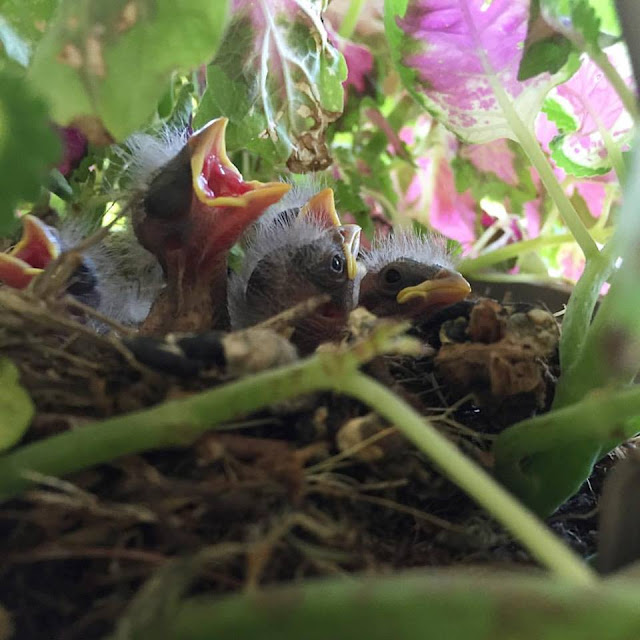 "The Real Deal is always going to win in the end."

I was watching The Tonight Show last night and once again a news report scrolls across the screen. "Twelve officers shot by 5 shooters." It continues to be shocking, however, in some ways it feels like we are becoming numb to all this madness.

"You don't get harmony when everyone sings the same note."
-Doug Floyd

When are we going to learn to embrace the differences and show love and kindness? It needs to start with each of us and it seems there is no time to waste...start now.

My E asked me this morning what was going on. It's a sad sad day when this type of situation is becoming so commonplace and we have to talk to our children about it on a daily basis. Teach your children well and be the example this world needs. Teach them to be kind and respect all lives, because we ALL matter.

"Do your little bit of good where you are; it's those little bits of good put together that overwhelm the world."
-Demond Tutu